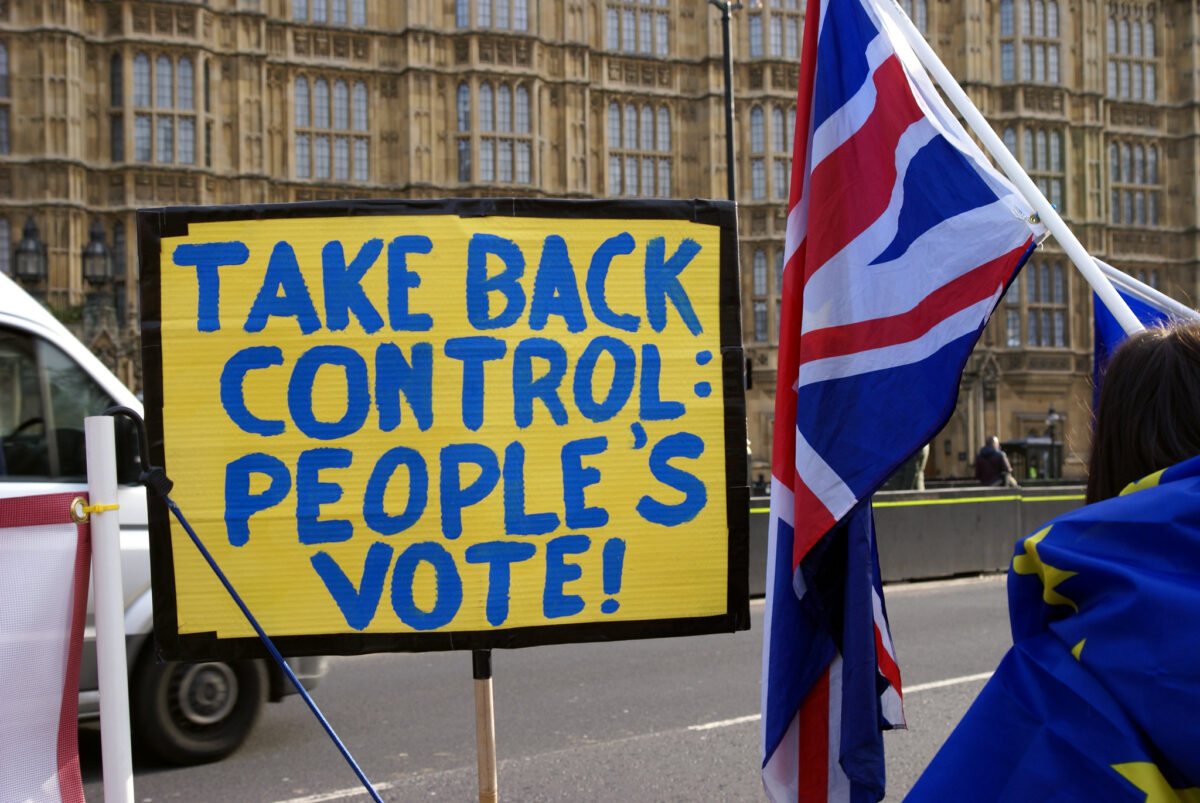 Ten reasons why “take back control” was probably the most devastatingly effective political slogan of modern times.

Looking back on last month’s EU referendum, my hunch is that the “take back control” message probably swung it in the last week. As a political message it had everything — all packed into three words. I don’t know if this was a stroke of genius on the part of someone at Vote Leave or just a happy (for them) accident. Although it was never actually printed on their publicity material, here’s ten reasons why “take back control” was probably the most devastatingly effective political slogan of modern times.

How could you not want to take back control? What’s your counter-argument: “Less control, more impotence!”? “Better off with someone else in charge”? To argue against it you have to waffle on about “pooled sovereignty” or “sharing control”, or you have to say something that sounds downright peverse. Either way, you lose.

How clever to replace the abstract concept of “sovereignty” with the much more solid and immediate “control”. People have to think about what sovereignty means, and then you’re into a discussion. But everyone knows what it means and feels like to be in control.

No one ever won an election by telling people they were shit. It says “you’re more powerful than you think”, “you can do this”. At a time when people feel increasingly powerless, telling them that they weren’t was incredibly powerful.

Instead of assailing people with a lot of doomy statistics about how bad the EU is and how many migrants are going to arrive, “take back control” simply told people that a better future is in their own hands. John Lanchester has written brilliantly about how most working people feel bewildered and powerless in the post-crash world. “Take back control” seemed to offer both an explanation and a way forward.

The “back” was important. Nostalgia is very powerful because it’s reassuring. When proposing a radical change it’s much better to say we’re going back to something we had before. That way, it seems achievable and less of a leap in the dark. And it’s more tangible. For the same reason, “Bring Back British Rail” sounds much more attractive and doable than “take the railways back into public ownership”.

It’s not us who will take back control, not the government, not even an abstract entity like “the British people”. YOU will take back control. This ties in very powerfully with the idea that the EU is remote and undemocratic, and carries the clear implication that individual people will somehow have more control over their lives.

It doesn’t promise free money, cheap beer or handouts. It says you are an adult, you can take responsibility for your and our future. It’s quite challenging in a way: “it’s up to you to make this work”.

No one was under illusions about who we would be taking back control from. The target was clear, and if you’re going to base a campaign on blame, it’s better to be clear about who you’re blaming: we had control, the EU took it, we want it back.

There’s a saying in the copywriting world: “good things come in threes”. Many of most our most effective and memorable political slogans delivered their hit in just three words: “thirteen wasted years” (1964), “Labour isn’t working” (1979), “Labour’s double whammy” (1992) and “Britain deserves better” (1997) were all election winners. Although shorter (#TakeControl) and longer (“Let’s take back control”) variants were used on Vote Leave publicity material, it’s the three-word version recited by Brexit leaders that everyone will remember. It says just what it needs to say and no more. By contrast, can anyone remember the Remain campaign slogan?

“Take back control” doesn’t promise anything, doesn’t refute anything, doesn’t warn about anything. It doesn’t pretend to offer solutions. Like a mantra, it can be thrown back in the face of almost any argument, without making the speaker look too foolish. Probably the most effective way to sell anything is to make people feel good about buying it. “Take back control” was just a simple instruction to do something that would feel good.