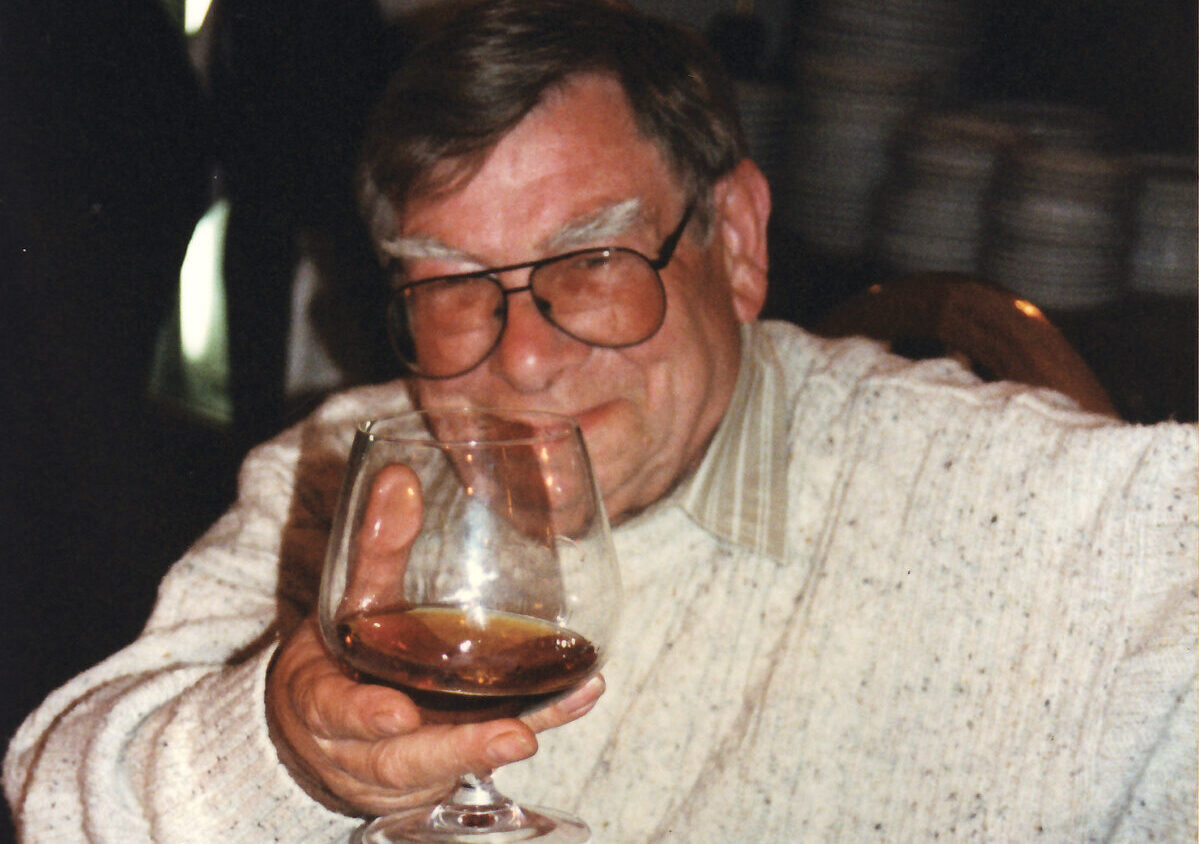 My dad, Don Ryan, was a World War II veteran, London fireman, electrician, DIY superhero and the best dad anyone could wish for. He would have been 100 today. To mark his centenary, here’s the eulogy I wrote and read at his funeral in 2009.

I would like to thank you all for being here today. At times like this, words are cheap. But they’re all we have. Words are my trade, and Dad loved words too. He was a big crossword man, scrabble too, and he had a particular fondness for puns – the cheesier the better. And he loved to regale us with obscure London slang – though I think he made some of it up.

A few words, then, for my Dad.

He had a long and happy life but it wasn’t always an easy life. Poverty, the great depression, and then war, made for a difficult start.

A few weeks ago, I went to look for the house in West Norwood where Dad was born. It’s gone, of course, the site is now the Lambeth Council municipal dump. Dad laughed when I told him. ‘I’m not surprised,’ he said. ‘It was already falling down when I lived there.’

When Dad was born there was no TV to watch, no radio to listen to. Money was still made of silver and, as Dad would no doubt say, tea was still made of tea. No one had ever heard an electric guitar, put milk in a fridge or seen the West Indies play test cricket.

In his lifetime, Dad saw four monarchs and 17 prime ministers. And I don’t think he was greatly impressed with any of them.

Dad wasn’t famous, but his was a big life, an important life. He was a modest man; he didn’t ask for any special recognition. ‘I was a bit of a coward, to be honest,’ he would say about some incident in the war. He never even bothered to collect his war medals and he wasn’t interested in ceremonies or reunions. He was quite happy to talk about the war, but his life was more than just that war.

He knew war is a ridiculous situation in which to place human beings, and if you couldn’t laugh at war, see it for what it was, it would take over the rest of your life.

But let’s not forget Dad saw things that none of us can even imagine.

Near the end of the war, Dad was with the Royal Armoured Corps advancing into Germany, when the Nazis sent batallions of old men and kids – some as young as 12 – to fight them.

The old men, no fools, surrendered en masse. The kids, pathetically brave, did not. The British troops refused to fire on them. They had to use heavy artillery from behind the lines, so the gunners couldn’t see whom they were shelling.

And then came the horror of the Belsen concentration camp – which he could hardly bear to talk about even sixty years later – where the survivors were so traumatized and hysterical that they had to be locked up again by the British troops who had liberated them.

Nothing in our lives can compare to those experiences.

Dad also played a small part in the Cold War. In fact, I sometimes think Dad might have started the Cold War himself.

In late 1945, he was stationed in Helmstedt, running a railway station right on the border between the British and Soviet zones of occupied Germany. The Russians were blocking an important convoy from Berlin, so Dad went across the frontier to see the Soviet Commissar at Marienborn, to try to persuade him to let the train through.

Dad went off and came back with his interpreter, a six-foot-six guardsman nicknamed ‘Lemon’. He waited on the platform while Lemon went into the office to speak to the Commissar. After few minutes of shouting, the Commissar crashed through the plate glass window and landed on the platform on his backside, pursued by Lemon, who stood over him, abusing his paternity in Russian.

The Soviets let the train through – grudgingly – but it’s probably a good thing for all of us that Dad’s methods of diplomacy weren’t used more widely in the decades that followed.

In the 1970s, Dad crossed the Iron Curtain again to work in Eastern Europe. He would spend weeks on end in such mysterious places as Moscow, Prague and Sofia. Some Russian engineers even visited our house in Frimley, accompanied by their KGB minder.

In the paranoid atmosphere of the 1970s, this led some of my schoolfriends to think that Dad was a Soviet spy. We were Labour anyway, so it wasn’t hard to make that leap in some people’s minds. When the Bulgarian dissident Georgi Markov was murdered with a poisoned umbrella on Waterloo Bridge in 1978, one of my friends asked me – quite earnestly – if Dad had anything to do with it.

The funny thing was, and this says something about the tragicomedy of the Cold War, no one seemed that bothered. I never told anyone Dad was a spy. But I didn’t deny it either.

Dad was many things in his life. But being a husband, father, and a good friend, was what he excelled at and enjoyed most.

It’s been a difficult couple of weeks, but I can never think about Dad for long without smiling.

The ridiculous sideburns he sported during the 1970s. The Denis Healey eyebrows he always refused to trim. The glint in the Eric Morcambe glasses askew on his face. His Shirley Temple fancy dress outfit that made him look like Miss Piggy.

However you picture him, I’m sure what you’ll remember most is his good humour, his optimism, his warmth and his sheer humanity.

The way he always saw the good side of things and the best side in people.

How he took things as they came, and people as they were.

And how his remarkable life was so rumbustious and full of fun.

But let’s not be sad for more than a few moments when we think of Dad.

When he died, I felt that everything associated with Dad was already falling indelibly into the past.

He meant, quite literally, the world to me.

But the past never leaves us, and neither do the memories of those we love. The past is always part of the present, and our lost loved ones become part of who we are, now and for the rest of our lives.

We began with words and I’ll end with one word.

This is something I was reading the night before Dad died. It’s from the novel Underworld, by the great American writer – Dad’s namesake – Don DeLillo. And it’s somehow become associated in my mind with Dad’s life and with my own. So I’d like to share it with you.

You glance out the window for a moment…and you try to imagine the word on the screen becoming a thing in the world, taking all its meaning, its sense of serenities and contentments out into the streets somehow, its whisper of reconciliation, a word extending itself forever outwards, the tone of repose, the tone of hail and farewell…a word that spreads a longing through the raw sprawl of the city and out across the dreaming bourns and orchards to the solitary hills.

Thank you for listening and may peace be with you.